How to Turn Off Personalized Ads on Several Ad Networks

Pronounced fishing, phishing is a tactic scam artists use to collect personal information from individuals for criminal purposes.  The most common form of phishing is to send emails posing for example as a bank or credit card company, asking the user to log in to address an issue or update their profile information.  The email may look legitimate, even bearing the company's logo, however the links in the email will lead the recipient to a spoofed or fake version of the company website, whereby the scammer will collect submitted information such as account name/number, password, and social security number. For more information, check out my article How to Spot an Email Phishing Scam.

Microsoft held an event in San Francisco on September 30, highlighting “what’s next for Windows” with the upcoming release of Windows 10 operating system.

Interestingly, they decided to skip past version number 9 for an unexplained reason, perhaps to distance itself from the stigmatized Windows 8, or to make the number on par with Apple’s OS X.  No official release date was announced, rumor has it is coming out sometime later in 2015.

Due to the bad press and poor reception Microsoft received with Windows 8, they are hoping to make a big comeback with this next release.  The big problem with Windows 8 is that Microsoft attempted to make an operating system that was tailored to touchscreen and tablet devices, however in doing so they crippled the functionality of the classic Windows desktop environment people have been familiar with now for decades (ie. the removal of the classic start button with start menu, replaced by the touch friendly modern start screen).

In addressing this issue, Microsoft aims to make Windows 10 a unified OS that will run on smartphones, tablets, laptops and desktops alike, however it will tailor itself to the intended functionality of the device it runs on.

For example, on desktop system, Windows will boot directly to the classic Windows desktop mode, including the classic start button and menu.  The start menu will not be entirely classic though, it will also include live tiles as seen on the modern start screen, while retaining many of the original start menu features we are all accustomed to. 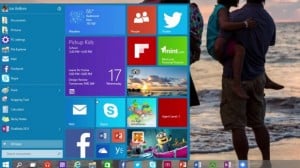 Hopefully this and other planned improvements for Windows 10 will serve to keep users who prefer the traditional Windows environment happy, while also moving forward with the modern, touch friendly interface for the smartphone and tablet realm, making Windows a truly “unified” operating system.

For a more in depth look into the rumors and information leaks surrounding the release of Windows 10, check out the following article on techradar.com.