The Importance of Keeping Flash and Java Updated

Published on May 26, 2017 by Ted Eiler in Computer Service and Repair, Computing News, Featured 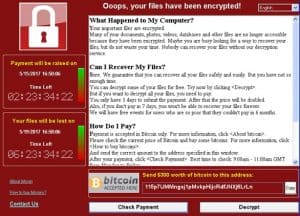 On the morning of Friday May, 12 2017, a worldwide ransomware cyber attack called WannaCrypt or WannaCry was launched, infecting over 230,000 Windows computers in 150 countries currently to date.  Many corporations and government agencies have been affected, including Britain’s National Health Service and Telefonica of Spain, one of the world’s largest telecom providers.

Ransomware is a type of malware which locks your PC and/or encrypts your important data files, leaving a note about what has occurred and demanding a payment (ransom) in order to regain access to the computer or decrypt the data files so they can be opened again.

The WannaCrypt ransomware exploits a Windows vulnerability in the SMB protocol (used for network file sharing) called ‘Eternal Blue’, which was discovered by the US National Security Agency and subsequently stolen and leaked out to the public.  The ransomware uses the vulnerability to gain access to the machine, encrypt its files and then leave a ransom note asking for several hundred dollars payable in bitcoin to get the user’s files back.

The ransomware is known to spread by tricking users into opening malicious email attachments or clicking on malicious web links.  It is also actively searching out computers that are susceptible to the Windows vulnerability and may infect a machine without any user interaction.

Fortunately, there are steps that can be taken to prevent WannaCrypt from infecting your computer:

Sources:
« FTC Cracks Down on Computer Te...
How to Spot an Email Phishing ... »